Clach An Airm - A Short Story 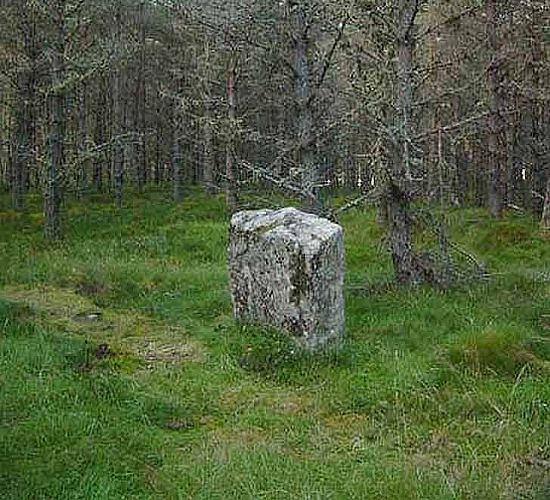 Picture the scene. It is early morning on Tuesday the 15th of April 1746.We are looking at a prehistoric standing stone located on a wide, open landscape at Gask in the heart of Strathnairn. Apart from a few sprawling, mature Caledonian Scots Pine trees scattered at random across the countryside, there is very little shelter from the north-easterly breeze. The sky is dark and heavy and there is a feeling of winter in the air even although it is springtime.

All around is a babble of sound. There are people here – a lot of people. All are speaking in the Gaelic language of their ancestors. There is a feeling of anticipation that something very important is soon to take place. Alongside the voices there is a continuous sound of metal scraping on stone. Men are lining up to take turns to sharpen swords, dirks and spikes on their highly decorated targes. This prehistoric stone is the focal point of attention. These men are preparing to do battle with an, as yet, distant enemy. It is important that they are prepared. Their lives may depend on how well they have sharpened their weapons. Clach an Airm has been used for centuries to sharpen swords, knives, domestic utensils and agricultural implements. Today is probably the most important day in its existence.

Clach an Airm is a colourful scene this morning. There are hundreds of men gathering together, dressed in the tartan garb of their forebears. The colours are those of various dyes derived from vegetation growing wild in their neighbourhood. A few of the people present are obviously men of some standing in the community. It is easy to tell – they are the ones wearing fine jackets, continental shirts with lace trim and expensive, decorative footwear. They are dressed for an occasion and many will look up to them for leadership as they face the enemy tomorrow some seven miles to the north east. Amongst them are Captain Angus MacKintosh of Farr, Captain Farquhar MacGillivray of Dalcrombie and - the man who will lead the entire Clan Chattan regiment into battle - Colonel Alexander MacGillivray of Dunmaglass. The officers of this clan regiment are important men from important families in Strathnairn and surrounding areas. Their whole demeanour effuses authority – and today their authority will count for more than ever before.

The great majority of people here are not so well dressed, however. They are clothed in a simple but uniform attire – the long woollen plaid combining to form the philimore and the philibeg (many different tartans and many different colours – there tends to be some similarity of colours and patterns within most family groups), a course homespun shirt and the distinctively Highland bonnet. The lucky ones have shoes – many are simply barefoot. Irrespective of whether these clansmen are rich or poor they share a common bond – one of kinship. They know their genealogies inside out. Some are here out of a determination to see Prince Charles Edward Stuart claim the throne of Great Britain once again for the Stuart dynasty – most people are here because they have to be. They would rather be tending their sheep, cattle and families. Refusal to turn up for the battle would result in their thatched roof being burnt and their cattle being confiscated by their landowning superiors – those men we see here dressed in the fine apparel. So there is no choice for the rank and file clansman – he simply ‘tows the line’ and joins the rest of the neighbourhood in taking up arms for Clan Chattan. The ordinary men ‘know the score’ and they will put their whole heart into the forthcoming battle.

So who are these men of the Clan Chattan gathered around this ancient landmark? Well, they are predominantly men from Strathnairn and Dores although there are some from further afield. Most of them bear the surnames of families belonging to this ancient confederation of clans. There are MacKintoshes, MacBeans, Shaws, MacGillivrays and MacPhails. There are also other less common local names – Smith (or Gow), MacPherson, Forbes etc.. Many of these men have already walked a number of miles this morning and are glad of the rest and opportunity to talk to friends and relatives whom they have not seen for some time. Others – like John Mor MacGillivray, who farms here at Gask – have walked only a few hundred yards from their homes in this well-populated part of Strathnairn. Gillies MacBean has walked across the moor from his farm over at Bunachton (clearly visible from where I stand) to join us here. Just on my left, now sharpening their swords, is 43 year old Donald Forbes who farms at Farr, Duncan MacKintosh from Aberarder and John MacPherson from Brin. They talk about the condition of their cattle and their plans for this year's crop cultivation while they scrape metal against stone.

The people gathered here are not men of any regulation “military age”. Some are well on in years, having seen action as young men in the 1715 Jacobite Rebellion. Their knowledge and experience will be invaluable over the next two days. Others are young – very young – mere boys even, barely in their teens. Highlanders are natural soldiers, highly effective in warfare, armed for both distant and close combat, exceptionally mobile and – on their own territory – almost invincible. They will fight not only for their leader but – most of all – for their brothers, fathers, sons, cousins and uncles who stand alongside them in the affray. They will fight furiously and passionately. Not just for their own pride but for the protection and honour of their kin. The might of the British Army fears the Highland warrior more than any other they have ever done battle with.

In the distance to the west can be heard the approaching sound of the pipes. I recognise the tune as one belonging to Stratherrick. The men of our neighbouring Strath are also making their way east to join us in the battle. These are Lord Lovat’s men from Stratherrick – Frasers, MacTavishes, MacDonalds etc.. We have not always been on friendly terms with them but today we come together as allies in a common cause. We will put old scores aside – at least for the time being.

There is a restlessness now amongst the gathering. Men form roughly into groups behind their leaders and head towards an area of open ground somewhere to the south and east of Inverness. They will reinforce a Jacobite Army that has endured seven long months of warfare across mainland Britain, fighting and winning two major battles during that time. The Highland soldiers waiting at Culloden Moor are cold, tired and hungry and are in no fit state to fight. The long, hard winter has taken its toll on them. Our men here are fresh, well fed and rested. They are well prepared for military action. The finest infantry in the British Army will greet the men of Clan Chattan with great fear and trepidation.

It is now early afternoon on Wednesday the 16th of April 1746. Clach an Airm stands alone once again on this open landscape. The sound of sharpening of steel on stone is now a memory. There is an ice cold, sleet-bearing north-easterly wind driving into my face as I look towards the scene of battle. The sound of artillery could be clearly heard for almost an hour from around 12.35pm. It is now approaching 2 o’clock. I see a small group of horsemen passing furiously a few hundred yards to the east, down in the Strath. Through my telescope I can see that they are important men – very important men. One is definitely none other than Prince Charles Edward Stuart himself. The signs are not good for our Strathnairn men. What has befallen them?

It is now almost 4.00pm. I see a scattering of men across Drumossie Moor. Some alone, others in small groups. All are in haste, gasping for breath, torn, tattered, blood-stained, blackened with gunpowder. Their eyes show trauma and deep anxiety. I speak to one man who continues on his way as he replies in a haphazard manner. I can barely make out what he is saying but my worst fears are confirmed. The great anticipation and optimism of yesterday has now been replaced by a sense of hopelessness, fear and panic. The enemy has been victorious.

I shout to another man as he rushes by. Again I plead for news of the battle and the fate of the Strathnairn men. It is now all becoming quite clear. The Clans were outnumbered, outgunned and fought on an ill-chosen battlefield. Their brilliant military tactician – Lord George Murray – had been replaced by an inexperienced and incompetent commander who made many basic errors of judgement. Defeat was inevitable but not given easily.

The men of Clan Chattan acquitted themselves well but they suffered more than any other clan regiment. They were first to charge the field, they broke through the first line of the Redcoats – and not just any regiment, they charged Barrel’s troops, the very best in the Hanoverian army. But from what I can gather, the casualty rate has been enormous, many have been taken prisoner and those who have escaped now fear greatly the consequences of this defeat for themselves and their families.

I learn that, like so many others from this Strath, John Mor MacGillivray from Gask will never return home again to his native soil. Captain Angus MacKintosh was wounded on the battlefield - his fate is unknown. Donald Forbes was captured and is now imprisoned in a miserable Hanoverian prison-ship awaiting transportation to the West Indies and to a life of slavery. Our courageous leader, Colonel Alexander MacGillivray, died bravely in the thick of the action as he urged his men forward against intense artillery and musket fire. Captain Farquhar MacGillivray, Gillies MacBean, Duncan MacKintosh and John MacPherson have been much more fortunate - they all managed to escape to safety from the battle. Freedom, however, will be short-lived for Duncan and John - the Redcoats will eventually hunt down and capture them on 7th of June. Safety for all others means a secure hideout in the hills with their families or - if you are one of the very few who has money - passage to France. There will be many anxious, hungry days, weeks and months ahead for those who lie low in the heather, awaiting the enemy search-parties.

Some days have gone by. It is now late afternoon on Wednesday the 23rd of April 1746. All around are roofless cottages with smoke still rising from the burnt embers. Hanoverian soldiers still scour the landscape, killing defenceless people of all ages and gender, destroying property and gathering what remains of the livestock from the crofts and farms around Clach an Airm. I cannot bear to recount the atrocities that I have seen carried out by these brutal and vengeful soldiers from the victorious army. They are out of control and bring shame on the name of the king they serve.

Clach an Airm will remain standing where it has stood for many centuries. It will be seen for many generations yet to come. But the details of what I have witnessed happening all around the vicinity of this stone, during the days and weeks following the Battle of Culloden, will be lost from historical record for all time. The personal memories of these tragic events will die with the people who lived through them. The pain arising from what took place on 16th April 1746 at Culloden Battlefield, and its aftermath, however, will remain with Strathnairn forever.