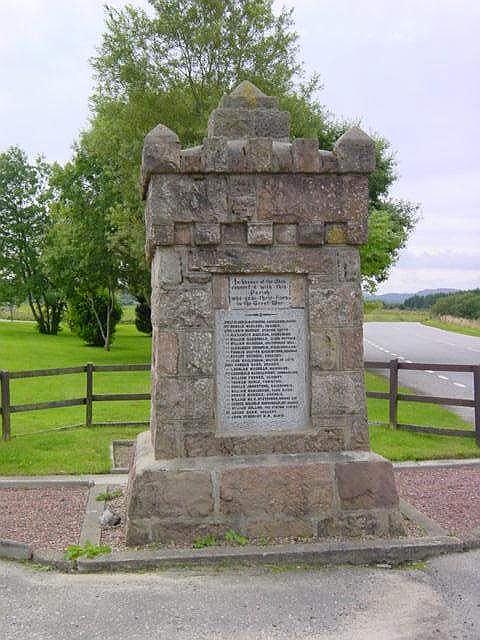 This War memorial at Daviot commemorates those of the Parish of Daviot and Dunlichity who gave their lives to secure the freedom and peace from warfare that we all enjoy in our present day and generation.

When looking at a list of names on a war memorial it is inevitable that one will begin to wonder about the thoughts, experiences and histories behind each of the young heroes who gave so much for our freedom and liberty. We know the names of those brave young men who gave their all – but what about those who survived the horrors of trench warfare, the killing fields of France of the ‘14-’18 War. Or what of those who survived the catastrophe of the St. Valery evacuation of 1940 and the heroic success of the D-Day landings in June 1944?

There is one gallant Strathnairner who must be remembered. His name was Jimmy MacBean – farmer from Achnabeachan and First World War hero of great renown. We will never know more than a tiny fraction of the deeds of Jimmy MacBean but what we do know is that he was a sniper of considerable reputation in the British Army during the horrors of the Great War. How many successful ‘hits’ he had against the Bosch will remain unknown. Jimmy was unusual in that he was able to return home and resume a ‘fairly’ normal life after the War (if such a thing was possible following such a devastating and traumatic experience).

It was purely by chance one Saturday morning during a public exhibition by the Strathnairn Heritage Association in Farr Hall in October 2002 that I mentioned the name of Jimmy MacBean to one elderly Strathnairner. She related to me how Jimmy had been wounded by the enemy and – as his comrades moved on – had been left behind presumed to be dead. Along came the Germans and discovered that Jimmy was still alive. They took him back behind their lines and nursed him back to health. In warfare Jimmy was an awesome warrior. But the same enemies whom Jimmy had fought so defiantly against were the same young men who gave Jimmy back his life. Jimmy would NEVER allow a bad word to be said against the Germans from then on.

One day during the 1960’s while wandering across a corner of the land around Achnabeachan that my father’s cattle grazed, one of my brother’s chanced upon some metal objects lying in a rubbish heap. Amongst the remains of domestic utensils, pots, pans etc. were a bayonet, a rusty pistol and some some severely corroded rifle barrels. These were the one-time possessions of the late, great Jimmy MacBean of Achnabeachan. But most poignantly of all were the medals – quite a lot of them – rusting into the earth. These medals had been the token of an Empire’s appreciation of the valour and bravery of a young soldier. What value did we place on the honour and sacrifice of a young Highlander from Strathnairn – who was prepared to give everything for his country - that recognition of his bravery could only be found on a rubbish heap?