Shinty - A New Beginning For The Traditional Highland Game In Strathnairn

The Return of Shinty to Strathnairn 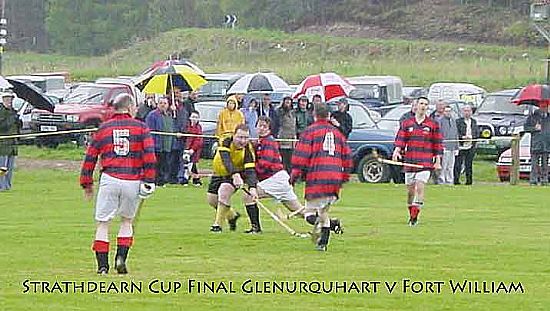 Shinty, the ancient game of the Scottish Highlander, has returned to Strathnairn after many years absence. The last Strathnairn shinty club joined forces with the neighbouring Stratherrick shinty team back in the 1930's to form a new amalgamated Straths Athletic Shinty Club. Later on, this merged club was to combine with the Foyers team to become Boleskine Shinty Club where it set up base in the village of Foyers by the shores of Loch Ness.

Well, local shinty history has now come full circle as Boleskine will now be relocating from Foyers and play their games on the splendid new shinty pitch beside the new Farr Community Hall in Strathnairn. Over the years many Strathnairners have continued to play shinty but were unable to do so on their home turf. From autumn 2002 the sound of camans (shinty sticks) clashing will be heard regularly in our Strath once again.

Since summer 2001 a new surge of interest in the game has been evident as many people from the Strath and surrounding areas have come together to learn the game or to hone long-dormant skills. These practice sessions have taken place outside during the bright summer evenings and indoors throughout the winter months. People from a wide range of ages (and gender) - from as young as 4 years old right up to a generation of locals who should really be starting to take things a bit easy at their time of life – have shown an impressive degree of commitment to the local practice sessions. This must augur well for the future health of the game in this area.

What Sort of Game is Shinty?

The history of shinty goes back many centuries in the Highlands of Scotland. However, it was only in the latter part of the 19th century that the present day rules became established. The game is basically a stick and ball game played by 12-aside teams, the object being to score in the opposition goal. This, however, is where any similarity with hockey ends. The curved end of the stick is triangular in section to allow the ball to be lofted high off the ground. The ball is approximately 3 inches (7.5cm) in diameter and is made of leather.

There is a close relationship with the other ancient Celtic game of hurling (as played in Ireland) although there are some some significant differences in rules and in the shape of the stick. It has also been claimed that ice hockey (formerly known as “shinny”) is derived from shinty and was played by immigrant Highlanders to Canada who found that only ice could provide a suitable surface for their shinty games during the winter months.

A well played match between able players is a delight to behold and the spectator will be impressed by the fluency, sheer skill and excitement served up by this incredible game.

Strathdearn Cup Final Held in Strathnairn For The First Time Ever

The final of the Strathdearn Cup took place on Saturday 18th May 2002 at the new shinty park at Inverernie, Strathnairn. After an enthralling game, Glenurquhart defeated Fort William by 5 goals to 3. Despite extremely wet weather conditions, this was one of the best attended Strathdearn Cup finals in many years. The hosting of this event was a major coup for local shinty and the Strathnairn community in particular. Hopefully the success of this event will ensure a repeat visit to Smith Park, Inverernie, of the Strathdearn Cup Final some time in the future.

Official Opening of The New Sports Ground at Farr

On 15th June 2002, the new sports ground, comprising full-size shinty and football pitches, will be officially opened. Smith Park (named after the donor of the land, Mr Maxie Smith) will host a friendly shinty match between the winners of the Strathdearn Cup, Glenurquhart, and Boleskine.