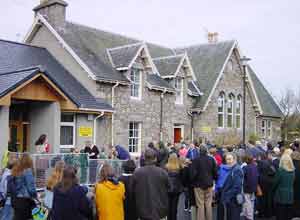 The community of Farr, near Inverness held a day of celebration on Saturday 9 November 2002 to mark the opening of the new nursery unit at Farr Primary School and the 125th anniversary of the school’s opening.

The celebrations began at 11 am when local councillor Kathleen Matheson formally opened the new nursery unit, which is attached to the primary school The new unit accommodates 15 three-year-olds and four-year-olds.

At 12.15 pm, guests moved outwith the school grounds for the naming ceremony of a new pond, which pupils have helped develop with help from the community and advice from Scottish Natural Heritage. It is to be called Jim’s Pond in recognition of the contribution made to the local community by the late Jim Forbes, Dalvourn, who farmed locally. His widow, Effie, was guest of honour at the opening of the pond.

The community was invited to inspect the school and nursery unit as well as displays reflecting the history of the school. A number of guests took part in guided walks around the moor, the woodland and pond - locations which bring back fond memories to many former pupils of Farr School. Many of the 200+ former pupils invited to attend were able to turn up on the day. The oldest former pupil in attendance was Ewen Paterson (formerly of Milton of Tordarroch and now Errogie) who started his education at Farr School during the 1920's. One of the furthest travelled was Keith Forbes who came all the way from the Island of Hoy, in the Orkneys, especially for the event. 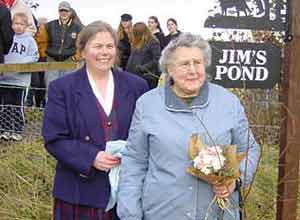 At 3.30 p.m. there was community singing in the school hall - evidence, if ever there was, that Farr School has maintained it's fine musical traditions right up to the present day.

Head Teacher of the 23-pupil primary school, Sheila Lamont, highlighted the tremendous effort made by parents and community representatives in helping to make this a special day for Farr. Everyone appeared to enjoy the celebrations, which reminds us of the important role the school plays in the life of this community.